a little glimpse at heaven

I have been dipping my toes back into the wine trade recently. Tastings with Isabel Estate from New Zealand and Finca Allende from Spain, courtesy of Fields, Morris & Verdin, have been interesting, both for the wines and the surroundings. I will get around to posting my tasting notes eventually, but first I wanted to share a little pic I took surrepticiously while rooting around the Berry Brothers cellar after the Allende tasting.

First of all, the cellars were incredible. Every nook and cranny held ancient, crusted bottles that would never appear on their list - they existed simply to be drunk eventually by directors with visiting VIPs. Neck tags, not labels, described their contents and I remembered why wine fascinates me so much, why I've bankrupted myself several times over in the fervent desire to taste the sublime, and sometimes the disappointing. So what, in this web of catacombs, could pound my heart like a gong? Well, it was a selection of ancient Tokaji Essence, dating from the start of the 20th century. I didn't really have time to check all the vintages and feared I would get in trouble for taking a shot, but they were a sight to behold. It was sad to see them caged up. I'd be more than happy to take part in their liberation. 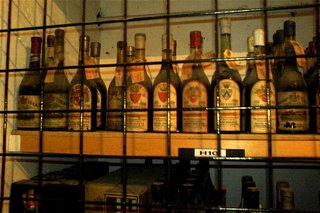 Richard
I would quite like to be able to throw myself at the ground and miss, but my aim is too good.